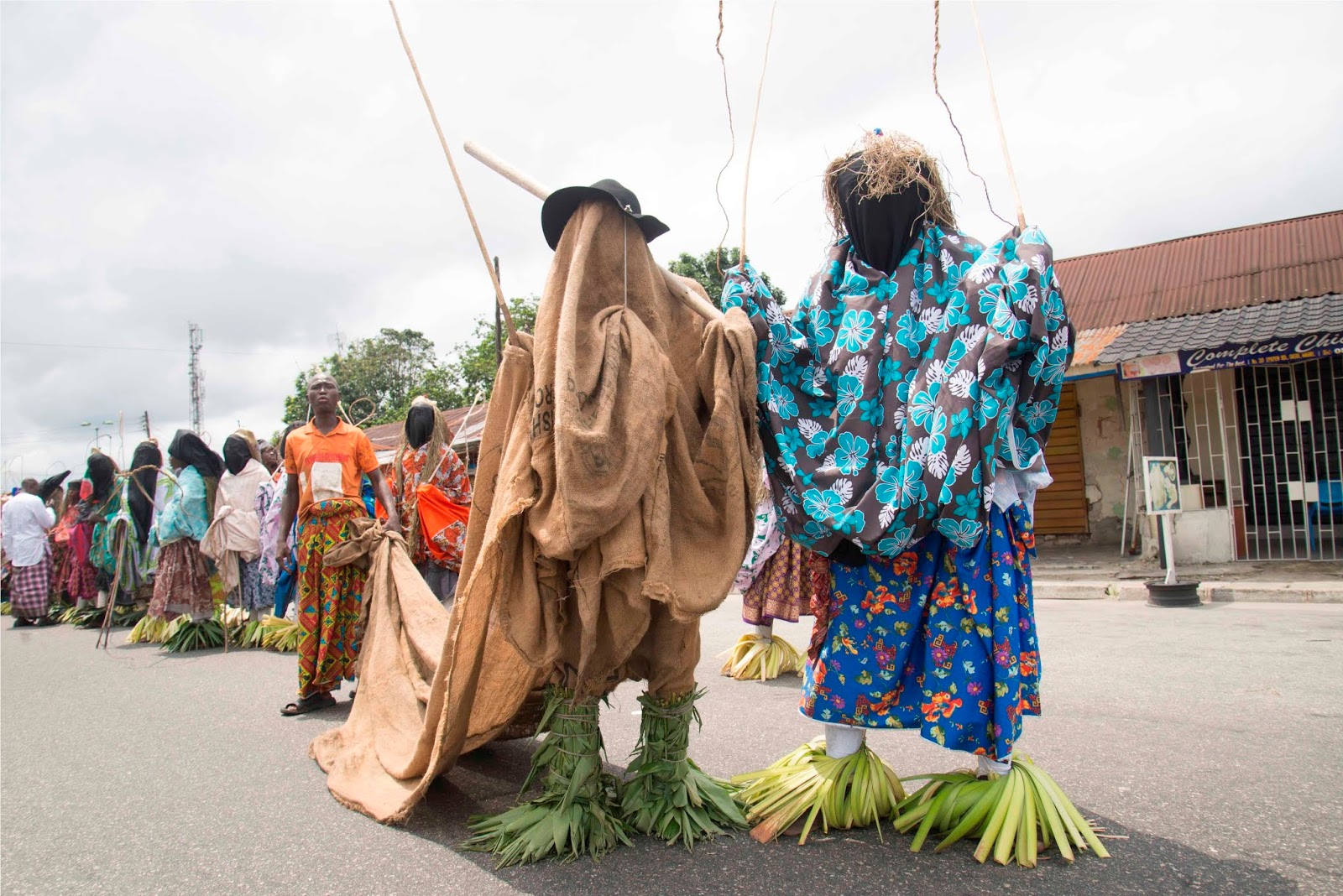 BRIEF HISTORY OF OKERE AND HER PEOPLE

Okere which means, ”it is small” in Itsekiri language, is an Itsekiri indigenous community and is the oldest in modern-day Warri metropolis having been found about 1497 by a Benin war general, Ekpenede, (Ekpen for short) and sent after Prince Ginuwa’s entourage. They had not been privy to the Oba’s plot to have his son, Ginuwa, found a new Kingdom, (what is known today as the Warri Kingdom).

Encamped across the Uton Tuba, with the Warri river between them and their quarry, and with no means to cross over to Ijala, Ekpen was compelled to end his chase and settle further upland at the place christened “Okere” in reference

He is said to have planted his staff at the centre of the settlement with the invocation “Ogungbaja Okere” (literally meaning that war will never come to Okere). This new staff grew into the tree which stands proudly by the Okere market junction today as a major historical landmark. Another tree, Arimabo – meaning one who sees and exposes what is seen, was planted after Ogungbaja Okere Odola and it’s still today at the centre of the Okere Market roundabout. Okere comprises six idimis: Odekporo, Ogun-Obite, Idimi Ode-lle, Idimi Jakpa, Ajamimogha and Idimi Sobo (Urhobo Quarter) which is the most recent, having come into existence on the arrival of some Urhobo immigrants about 1778 and were allowed to settle there by the reigning Town Head (Olare Aja), Ogieboro Arukuneyi. Today due to the unhealthy stoning of the embers of ethnicity, Idimi Sobo now calls itself the “Okere Urhobo Clan”.

The Itsekiris live in the westernmost part of the Niger Delta bounded by the Bight of Benin on the west and Lat 05 45E and Lat 05 20N. The administrative unit known as the Warri division, now broken into three -Warri Local Government Council areas: Warri North, Warri South-West and Warri South; is about 1,520 square miles in size.

Warri metropolis is the headquarters of Warri South Local Government Area and Okere is the pulse centre of the metropolis. Okere is situated near the Warri river on the South, bounded by Effurun in the North-East and the Agbassas on the South-West. The Okere Creek cuts through the entire community and empties into the Warri river.

Okere people are mostly Christians though some practice traditional African religion ancestor worship (ebura), there are up to fifty Churches in Okere alone but the biggest and most popular is the Word of Life Bible Church centred in Ajamimogha Quarters in Okere.

First Bank, Union Bank, U.B.A., Zenith Bank, Standard Chartered, FCMB and Access Bank are prominent commercial banks around Okere. Okere Community Bank is the only commercial bank and it is the strongest and most viable in the whole of Warri metropolis

Prominent N.G.O. based in Okere while Eni-Jones Peace and Development Initiative is the most prominent C.B.O

There is a sole Youth Forum: Omologho, which runs youth affairs in the Community.

LANDMARKS, SYMBOLS AND THEIR SIGNIFICANCE

The rich cultural heritage of the Okere people is further exemplified mostly in the traditional landmarks and symbols and in its supernatural significance to the Community. Rivers, Sacred Trees Groves and pulse centres acquire a sublime significance that touches the very existence of the community.

The Okere Creek is and remains the drainage for the whole of Warri metropolis. The Creek opens and empties into the main Warri River at Miller Waterside by Old N.P.A Port.
It is a common sight to see children and adults swimming at the Eye “River” by Esisi Bridge and at the Ajamimogha “River” by Maabiaku Link through which the Awankere Festival deity, Okioro comes into the community before the Festival and it is also the ritual exit at the end.

Like was the custom with early founders of settlements. Ekpenede planted his staff at the centre of present-day Okere with the invocation “Ogungbaja Okere” (literally meaning that before war comes to Okere, it will be yesterday i.e. War will never come to Okere). Ekpen’s staff grew into a tree and this tree has been known by the name “Ogunbaja Okere Odola” – from the inception of the town, it can still be seen by all, even today at the Ekpen Street/Okere Market Road junction just by the Okere Community Bank.

Arimabo is another sacred tree, also planted by Ekpenede that stands at the centre of the Okere Market roundabout, protected by white slabs. It is of the female gender and forewarns members of the community against any malevolence. This tree was the target of the ldimi-Sobo “army” who tried to burn it down during the ill-fated May 9th 1993 crisis between the Urhobos of Idimi Sobo and their Itsekiri benefactors in Okere, so as to obliterate the fact that Okere was founded by Ekpenede, but to their consternation, the tree could not be killed. The new lushly rich green foliage that adorns Arimabo today is a living testimony to the magic, the mystery and the mystique that is Arimabo.

Erele is the sacred tree that is hemmed in by a fence painted white beside Pa. Macrocos Uwejamomere’s house at Okere market square. Erele shrine is meant to cleanse both widows and widowers in the event of the death of either partner. The cleansing ritual is usually performed about three days after the final burial of the deceased. By performing the Erele ritual (OKPO) the bereaved partner cleanses the last traces of death from the home.

The OKPO ritual symbolically represents a clean break from all other funerary rites, only those whose partners have died and have done the OKPO ritual can attend other’s funeral ceremonies and participate in ancestral worship (Ebura). Visitors from far and wide have been known to come to Erele to perform the OKPO ritual.

It is made from a particular plant whose stem is woven into a rope-like extension with a strand, “ayo”, got from the inside of raffia palm is attached to the ropelike end and used to whip the ground, it produces a sound like a gunshot.

The festival takes place during the heavy rains between July and August. Apart from the
Ogieboro, nobody is allowed to cover himself with an Umbrella and no male is allowed to wear a hat during the festival period. The rains have a therapeutic effect on all participants, and spectators alike, as it washes all sickness, other ailments, curses, ill-luck e.t.c

There are two different versions as to the origin of the Awankere Festivals. One version posits that its origin dates back to the later part of the 15th century when Ekpen, the Chief-Warrior founder of Okere, introduced it.
A certain woman, named Mogboruko went fishing along the Okere creek, near Ajamimogba and caught a strange object in her fishing basket on three different occasions. Through divination, it was discovered that the object was a symbol of Okiroro, the deity whose life is re-enchanted annually during the Awankere Festival. That the Ajamimogba shrine is located in Ajamimogba, this is the second version of the origin of the festival. Most Okere people, however, tend to stick to the first version that Ekpen brought it from Benin. Awankere is celebrated for three lunar months between June and August annually except in any year when the bigger Eleghe festival is celebrated.

The Eleghe festival usually incorporates the Awankere and is every twenty years. The Awankere is a fertility festival. The community is purified and sacrifices are made to appease and thank the deity for all the blessings of the preceding festival year prior to the commencement of the ceremonies. Such rites as ajafifa (purification of the community), ibiribi (the spiritual centring of the community), Ode’ gbigba (sweeping the arena) and Awerewere (cleansing ceremony), precede the main event.

The festival proper is a convivial communal rite with miming of sexual acts, phallic symbols and lewd songs replete with fertility images. Explicitly expressive dance movements evoke an erogenous empathy between spectators and performers. Among the Masquerades, the Oshogw’umale who is always attired in resplendent white is the father while Okpoye, dressed in sackcloth is the mother. All other masquerades are the children of the Oshogw’umale and Okpoye and wear the costume of varied colours.

A typical Awankere masquerade wears a flowing robe of the local “agbada” variety to cover the upper body and ties two loin cloths around the waist over white leotards to cover the lower parts. Imerigo, made from palm fronds, are tied around each ankle. A hat, ebo for the masker’s head has long, loose raffia threading hanging halfway around its rim. A light, black scarf hangs from the front of the ebo masking the wearer. All the masquerades apart from Okpoye carry two specially designed whips called ukpasha, one in each hand. The ukpasha produces gunshot-like sounds when the masquerades whip the floor with it.

The festival takes place during the rainy season; thus masquerades and other splashes about in the festival is to ensure that the environment on land is conducive for the temporary stay of the deity, Okiroro, who lives in the waters. The splashing about in the rains and mud is to the people a symbolic washing away of evil spells and diseases from their bodies. The festival lasts for five weeks with one performance each week on succeeding days. Like the Egyptian Osiris and Tammus, Okiroro’s festival combines both the sacred, in its numerous rituals and the profane, in its orgiastic dance and lewd songs. Underlying it all is the Final Ritual Race.

The climax of the final day of the Awankere festival is the ritual race run by the masquerades. The race takes place at last dusk, about 6:30 pm when the first shade of darkness has crept in.

The masquerades disrobe, leaving only their loincloths, imerigo and ukpasha, at a point about 120 metres from the final point of departure at the arena where the Ogieboro, Chief Priest (Ojo’umale) and other elders are waiting. The entire community lines all sides of the market square and an eerie silence descends on the whole arena.

The Oshogwu’umale, escorted by two elder on his left and on his right sides, with slow, calculated steps, troops to the arena and stops at the pulse centre, facing the Ogieboro and Ojo’umale. He chants a final goodbye litany to the people, turns around and begins to trot to Ẹkun (point of departure).

As he appears to the other masquerades, they all burst into a race, like sprinters shooting out of their starting blocks. The quiet in the entire audience is also simultaneously broken, as they all shout with one voice “gbare, gbaaree, gbare…” (Meaning the masquerades will carry all the disease and evil forces away from individuals and the entire community and wash into the sea) as the masquerades run to the pulse centre and back for the final journey to the shrine. Coins and cowries are thrown after them as they run away to their abode beneath the sea.

The first masquerade to reach the arena and get back to where the race started is usually given a prize. In times of yore, it used to be a goat.