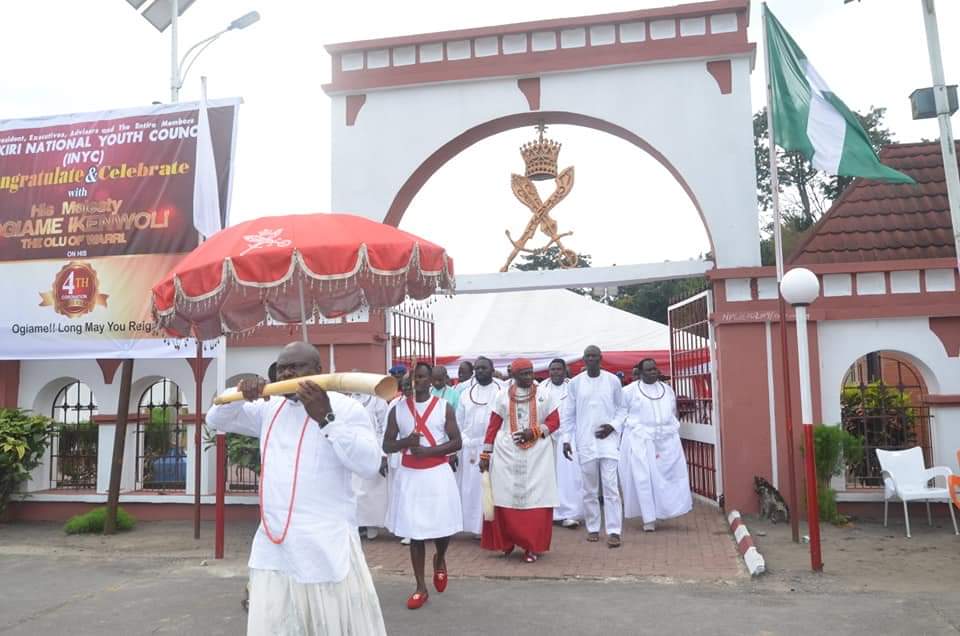 Names Of The Warri Kingdom

Over the past 500 years, the Kingdom of Warri has been called the following names and they are all derivatives of the pronunciation of the ITSEKIRI word IWERE.

Some Notable People In Historic Records On The Kingdom Of Warri.

Captain Sieur Jean Francois Landolphe he was a frequent guest to the king Lord Sebastian Otobia, king of Owhere at Warri Palace. He spent about 30 years in the kingdom of Warri. Landolphe bought land from the Warri King on 4th of May 1788 to build a Farm and French Colony. The king had twice come to Landolphe’s rescue, in 1778 and in 1782, when Landolphe failed to navigate his ships La Nigresse and later La Charmante Louise out of the Benin River before the summer season. The king had taken pity on the French and invited them to lodge at his capital.

Accepting this offer, Landolphe spent time there inspecting the surrounding area, which he described as very fertile; pineapples grow without cultivation. One finds an extreme abundance of oranges, lemons, melons, and pumpkin. Purslane grows in the streets. Sorrel, wild spinach and other legumes are just as common [and] the forests furnish expensive woods.’29 In addition to its fertility, °where’s milder climate and proximity to the coast prompted Landolphe to consider founding a settlement there. The Memoires also reveal how the King of Owhere continuously worked to win Landolphe over, probably spotting a great opportunity to gain access to coveted European goods. To this end, the king entrusted his nephew, Prince Boudakan, to Landolphe’s care and instructed the Frenchman to take him to France and introduce him to French culture.3°

Back in France, Landolphe managed to obtain royal support for his project. He also found a willing sponsor from Saint-Malo, the Brillantais Marion firm. Together they formed the Compagnie d’Owhere et de Benin. Prince Boudakan attracted considerable interest at the Court of Versailles—even drawing compliments from the Saint-Domingue slave-owner Moreau de Saint-Mery—and as a result Landolphe and Brillantais further obtained an exclusive three-year privilege to the Benin trade.

Prince Mark Budakan a nephew of the King of Warri

Prince Mark Budakan a nephew of the King of Warri. He was taken to France around 1786 by Captain Sieur Jean Francois Landolphe to learn French and their system of administration. Budakan is a son to the sister of the reigning King of Warri. Prince Mark Budakan was presented to the French Royal Court in 1786 and was granted a royal pension of 1500 France. The young prince was shown around Parisian society where he left a good impression indeed. He even went to see the King of France, Louis XVI and a portrait of him was made in the French Royal court.

He was well received by Mighty King Otobia in city of Warri on his return from France.

M. F. J. Palisot, Baron de Beauvois, was born July 27, 1752 … In 1786, He left France in the year 1786 with an expedition to found a colony at Oware (or Owerri/Aweri) at the mouth of the Niger River in what is today Nigeria. Palisot assembled material from there with some collections from the neighboring country of present-day Benin. From time to time Palisot sent specimens back to France.

The bulk of his collections were destroyed when the British pillaged the colony and set fire to the trading post where his material was stored. Palisot de Beauvois never saw most of his collections in Owara again, as they were plundered by the British in 1792. An outbreak of yellow fever ravaged the colonists, and Palisot became so ill with the disease that in 1788 his friends placed him on a slave ship bound for Haiti where he had an uncle.

One thought on “Names Of Warri Kingdom”