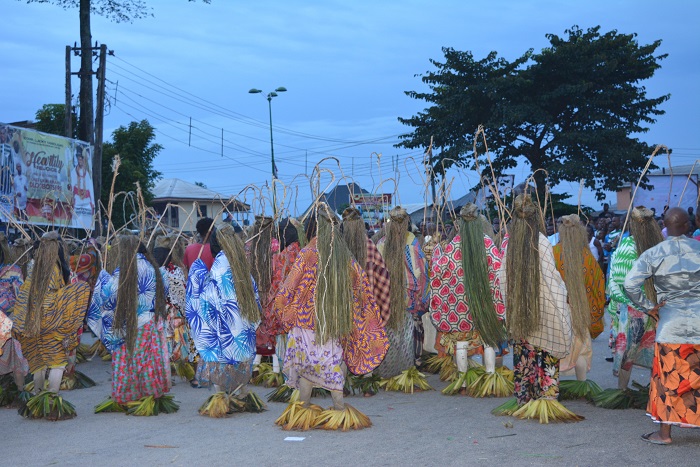 The Origin of the Awankere Festival

There are two different versions as to the origin of the Awankere Festivals. One version posits that its origin dates back to the later part of the 15th century when Ekpen, the Chief-Warrior founder of Okere, introduced it.
A certain woman, named Mogboruko went fishing along the Okere creek, near Ajamimogba and caught a strange object in her fishing basket on three different occasions. Through divination it was discovered that the object was a symbol of Okiroro, the deity whose life is re-enchanted annually during the Awankere Festival.

That the Ajamimogba shrine is located in Ajamimogba, this is the second version of the origin of the festival. Most Okere people, however, tend to stick to the first version that Ekpen brought it from Benin. Awankere is celebrated for three lunar months between June and August annually except in any year when the bigger Eleghe festival is celebrated. The Eleghe festival usually incorporates the Awankere and is every twenty years.

Awankere as a Fertility Festival

The Awankere is a fertility festival. The community is purified and sacrifices are made to appease and thank the deity for all the blessings of the preceding festival year prior to the commencement of the ceremonies. Such rites as ajafifa (purification of the community), ibiribi (the spiritual entering of the community), Ode’ gbigba (sweeping the arena) and Awerewere (cleansing ceremony), precede the main event.

Among the Masquerades, the Oshogw’umale who is always attired in resplendent white is the father while Okpoye, dressed in sack cloth is the mother. All other masquerades are the children of the Oshogw’umale and okpoye and wear costume of varied colours. A typical Awankere masquerade wears a flowing robe of the local “agbada” variety to cover the upper body and ties two loin cloths around the waist over white leotards to cover the lower parts.

Imerigo, made from palm fronds, are tied around each ankle. A hat, ebo for the masker’s head has long, loose raffia threading hanging halfway around its rim. A light, black scarf hangs from the front of the ebo masking the wearer. All the masquerades apart from Okpoye carry two specially designed whips called ukpasha, one in each hand. The ukpasha produces gunshot-like sounds when the masquerades whip the floor with it.

The festival takes place during the rainy season; thus masquerades and other splash about in the festival is to ensure that the environment on land is conducive for the temporary stay of the deity, Okiroro, who lives in the waters. The splashing about in the rains and mud is to the people a symbolic washing away of evil spells and diseases from their bodies. The festival last for five weeks with one performance each week on succeeding days. Like the Egyptian Osiris and Tammus, Okiroro’s festival combines both the sacred, in its numerous rituals and the profane, in its orgiastic dance and lewd songs .Underlying it all is the Final Ritual Race.

The climax of the final day of the Awankere festival is the ritual race run by the masquerades. The race takes place at last dusk, about 6:30pm when the first shade of darkness has crept in. The masquerades disrobe, leaving only their loin cloths, imerigo and ukpasha, at a point about 120 metres from the final point of departure at the arena where the Ogieboro, Chief Priest (Ojo’umale) and other elders are waiting. The entire community lines all sides of the market square and an eerie silence descends on the whole arena.

The Oshogwu’umale, escorted by two elder on his left and on his right sides, with slow, calculated steps, trops to the arena and stops at the pulse centre, facing the Ogieboro and Ojo’umale. He chants a final goodbye litany to the people, turns round and begins to trot to Ẹkun (point of departure). As he appears to the other masquerades, they all burst into a race, like sprinters shooting out of their starting blocks.

The quiet in the entire audience is also simultaneously broken, as they all shout with one voice “gbare, gbaaree, gbare…” (Meaning the masquerades will carry all the disease and evil forces away from individuals and the entire community and wash into the sea) as the masquerades run to the pulse centre and back for the final journey to the shrine. Coins and cowries are thrown after them as they run away to their abode beneath the sea.
The first masquerade to reach the arena and get back to where the race started is usually given a prize. In times of yore, it used to be a goat.