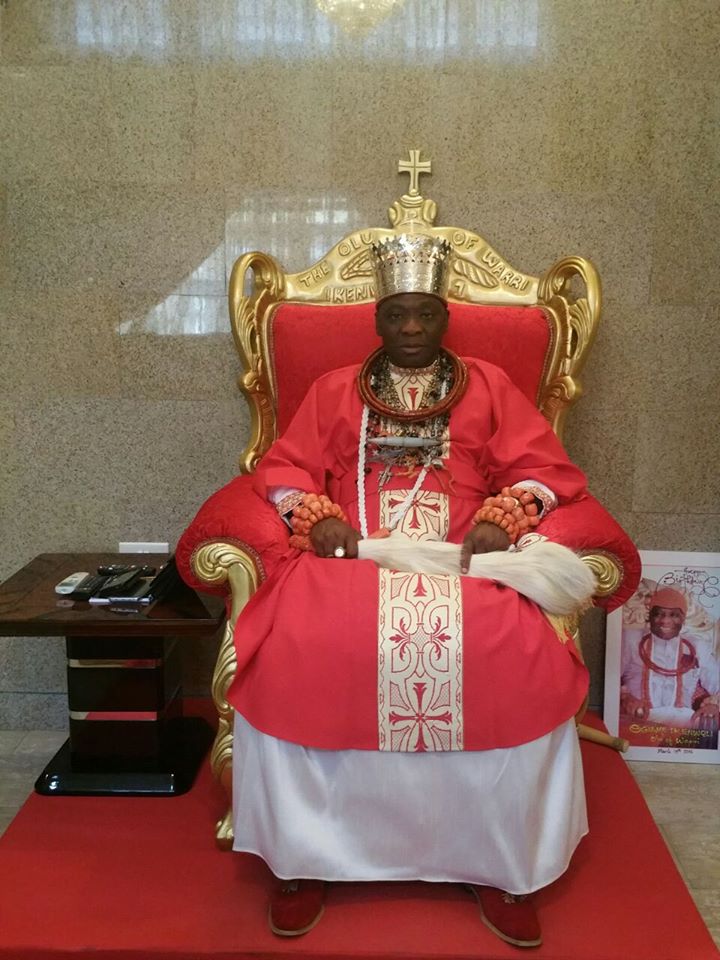 The kingdom of Warri and it’s Kingship have been in existence for over 400 years before the founding of NIGERIA. It’s a big joke to insinuate that it was Chief Obafemi Awolowo who gave the tittle of the Olu of Warri or King of Warri to the itsekiri Monarch. All the information referenced on this article have been in existence for centuries before the birth of Chief Obafemi Awolowo. But what really happens in the 1950’s?

In the 1950’s the Itsekiri Monarch tittle was changed from Olu of Itsekiri to Olu of Warri. Why was this change done? Let’s go back a little further in history.

Following the death of Olu Akengbuwa II, who reigned as Olu of Warri, in 1848, there was an eighty-eight-year interregnum during which there were no Olus crowned in Warri. In that period, Warri or Itsekiri country was ruled by governors, who were mostly powerful merchants. Nanna’s defeat by the British Royal Navy in the War of 1894 greatly weakened these merchants and would later pave the way for the resumption of the monarchy in Warri in 1936.

In 1914, Lord Lugard created Nigeria by amalgamating the Northern and Southern protectorates. For administrative purposes, provinces were created throughout the new country. A province was named after “Warri” and this province encompassed Urhobo, Ijaw, Isoko, Ndokwa and Itsekiri lands.

During preparations to resume the Itsekiri monarchy by the coronation of Ginuwa II in 1936, official references were to the “Olu of Warri”. However, the Urhobo Progressive Union, under the leadership of Chief Mukoro Mowoe, prevailed on the colonial administration to change the title to “Olu of Itsekiri”. His argument was that the entire Urhobo Division, being part of Warri Province, could be construed to under the Olu’s domain. Predictably, the change was denounced by notable Nigerian personalities who were not even Itsekiri. Dr. Nnamdi Azikiwe, then a newspaper publisher, wrote as follows in the West African Pilot of May 14, 1940:

“His Highness Ginuwa II is Olu of the Itsekiri-speaking people, who live on Itsekiri land… If the matter is discussed in detail, it will be found that a definite title is necessary, in which case, the Olu of Warri seems to be the most historical and correct. When we speak of the Oba of Lagos we refer to the Paramount Native Ruler of Lagos, although Lagos is peopled mainly by Yoruba-speaking peoples and Lagos is part of Yorubaland. So too, in the case of His Highness Ginuwa II, the Olu of Warri is the Paramount Native Ruler of Warri…”

It is noteworthy that, after a riot and an inquiry in 1952, Chief Obafemi Awolowo invited both Itsekiri and Urhobo delegations to present their case for and against the Itsekiri monarch being called the Olu of Warri.

The late Chief M.E.R. Okorodudu presented the Itsekiri case based on historical facts and common sense. Chief P.K. Tobiowo spoke for the Urhobos but did not dispute the historicity of the Itsekiri claim. He merely repeated Chief Mowoe’s assertion of 1936 that since Warri Province included other homelands, the title “Olu of Warri” would suggest that the Olu was titular head not only of Warri Division but also to other divisions within the province.

Chief Okorodudu then suggested that the name of the province be changed to Delta, confining “Warri” to Itsekiri homeland which had been the Olu’s domain for centuries. Both the Urhobo delegate and the Government accepted this compromise. This was then presented to the Western House of Assembly in Ibadan where it was debated and adopted. The name of the province was therefore changed to Delta and title of the Olu of Warri reverted to its original form.

Ijaws never protested against the title and Urhobos accepted the confinement of the power of the Olu to Warri – the Itsekiri homeland.