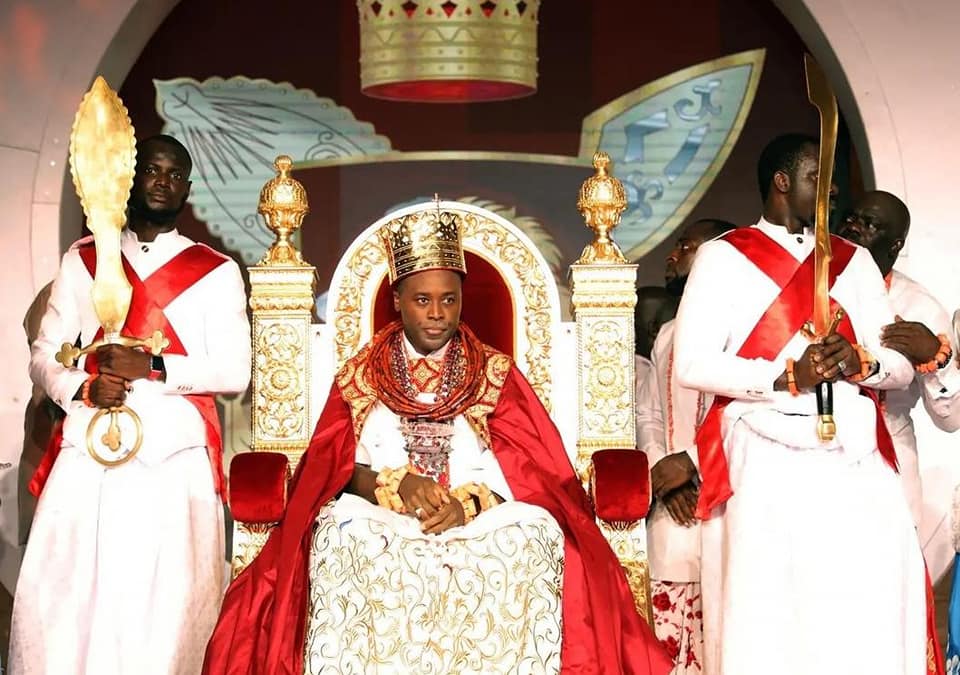 The coronation commenced with the Boat Regatta at the Warri River en route to Ode-Itsekiri, the ancestral home of the Itsekiris. The Boat Regatta featured boats by several Itsekiri communities and organisations along the Warri River. The boats were decorated in different unique colours and also had flags that show the community name and title of the community. The boats were manned with several people using paddles to paddle the boat towards Ode-Itsekiri.

A unique boat decorated in red colours housed the Olu of Warri designate during the regatta. Some of the Chiefs were also part of his entourage in the red boat. They were dressed in their traditional attires. The boat paddlers were all dressed in red with red paddles.

On getting to Ode-Itsekiri, the Omoba proceeded to the Palace where he performed his last chores before ascending the throne which is very significant as he is no longer expected to perform any of thee chores after he becomes the Ogiame. The chores included breaking firewood for the last time as an ordinary Itsekiri, fetching water for the last time and paddling a canoe for the last time.

After the chores, he proceeded to pick the title which he would use throughout his reign and which symbolises his new name. To choose this name, the Olu is expected to pick a ceremonial sword from 21 swords which have 20 symbolic titles of previous Olus and other titles with the last one being an unnamed sword. If the Olu picks a title used by a previous Olu, he would be called by that title and the number of the Olus that has used that title. If he picks the unnamed title, he would be at liberty to create a new title like his predecessor who picked an unnamed sword and named it Ikenwoli.

After the walk, he was led into the coronation hall which was already filled up with dignitaries from all works of life. His throne was placed on the podium. The MC invited award-winning musician Omawumi Megbele who is an Itsekiri to render the Nigerian National Anthem. This was followed by the opening prayer which was rendered by Chief Mene Brown. Chief Johnson Atse presented a short speech as the Chairman of the Warri Council of Chiefs before welcoming Chief Gabriel Awala to crown the Olu of Warri.

The Olu was beaming with smiles after the crowning as the Itsekiris are hoping for a prosperous nation going forward.

Deputy President of the Senate, Ovie Omo-Agege represented President Muhammadu Buhari during the coronation event. While showering praise on Ogiame Atuwatse III, Ovie Omo-Agege informed everyone present that his mother hails from the Warri Kingdom.

Some of the traditional rulers and dignitaries also in attendance include the Ooni of Ife, Oba Adeyeye Ogunwusi; Obi of Onitsha, Alfred Achebe; Aare Ona Kakanfo of Yorubaland, Gani Adams; Dein of Agbor Kingdom, Dein Keagborekuzi I; His Majesty, King (DR.) Dandeson Douglas Jaja, Jaja of Opobo and many others.