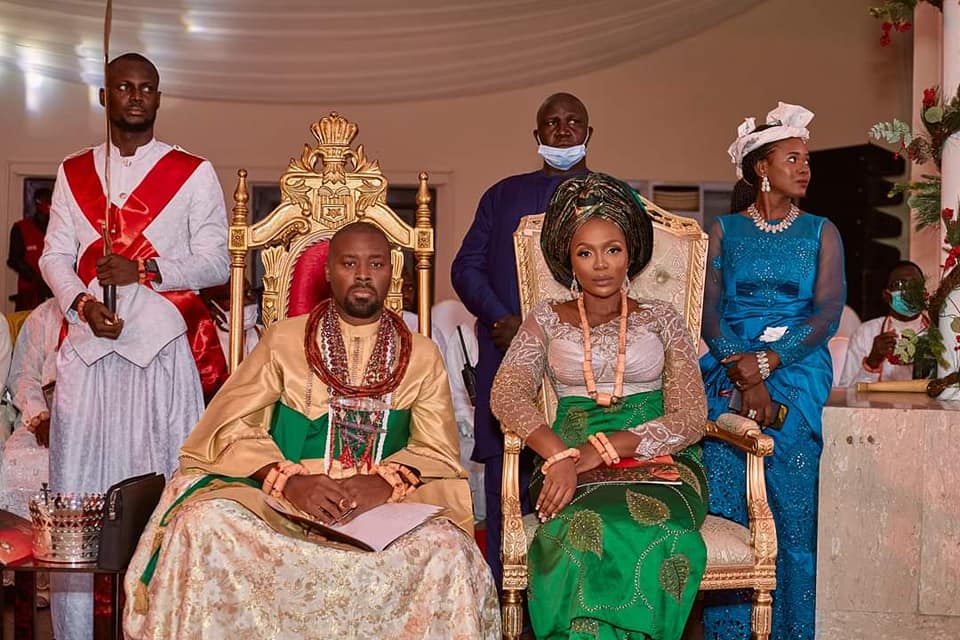 The Iwere Royal Choir were the cynosure of the event as they treated guests to a soulful orchestration of Christmas carols rendered in both Itsekiri Language and in English. The Iwere Royal choir were dressed in white and red robes, which significantly is the colour of Christmas and also the royal colours for Warri Kingdom. Some of the guests were also cladded in red and white.

Immediately after the arrival of guests, His Majesty, the Olu of Warri Kingdom, Ogiame Atuwatse III and Olori Atuwatse III entered in grand style with all the guests standing up for his entry. His entry was welcomed by a song from the Iwere Royal Choir which continued until after taking his seat. After taking his seat with his Olori sat on his left hand and Iyi Olu on the right hand, the Ojoyes paid homage to Ogiame Atuwatse III as is customary by greeting the Olu of Warri with their clenched fists raised and chanting Ogiame Suo o. This was followed by others who came to bow before the King and also chanted Ogiame Suo.  Soon after, the events commenced with the rendering of the Itsekiri National Anthem by all guests present and this was followed by a new theme song for Ogiame Atuwatse III by the Iwere Royal Choir titled “Ogiame Atuwatse Oketa”.

The master of the ceremony, Barrister David Oki then welcomed and introduced guests and dignitaries present which was followed by the Opening Prayer led by Bishop Bawo Otone. Dr Omatsola Ebenezer Kpiasi gave a brief story of how the Royal Iwere Royal Choir came to be especially focusing on the love for classical and Gospel music by His Majesty, Ogiame Atuwatse III, Olu of Warri. He explained how the King and His wife, Olori Atuwatse, have remained passionate about hosting Christian musical events from time to time in the Palace prior to his ascension to the throne. According to him, this innate desire of the King led to the formation of the Iwere Royal Choir, who are well-revered for their ecclesiastical performances of classical and gospel songs. Speaking further, he mentioned Christmas evokes magic, peace, love and understanding. Citing Ebenezer Scrooge, Christmas also involves the singing of sound. This was the first time by royal command that on this land, we are having a royal Christmas concert. To him, the Iwere Nation has started a new journey on Christmas.

He then ushered guests into the first rendition of the Royal Iwere Christmas Carol concert by the Iwere Royal Choir by welcoming Engr. Monday Mimiko and Dr Mudi Eyeoyibo Igbi to lead the choir. The first set of carols rendered were “Once in Royal David City”, “The Lord’s Prayer”, “The first Noel” and “Silent Night”. The guests were invited to sing along using the lyrics provided in the programme. The carols were inspiring and melodious, raising the moods of the guests and those following online. This set the tone for the rest of the evening as the presentations that followed were beautiful.

Chief Brown Mene was introduced by Barrister David Oki to do the first Bible Reading which is taken from the Book of Isaiah 9:6-7. After the Bible reading, three solo songs which were specially written and interpreted for Ogiame Atuwatse III were rendered and they include “Oyo Ogiame”, “Halleluyah Itse” and “God save the King”. This was followed by “O come all ye faithful” and “Hark the Herald Angel Sing” which was a congregational song and presented by the Royal Iwere Royal Choir.

In a move that displayed the Olu of Warri as a King for his people and a man of his word, reinstating his commitment to instilling gender equality in his Kingdom, Barrister Oki invited Miss Oritseweyinmi Ogholaja (a broadcaster) to the stage to introduce the immediate past governor of Delta State, Dr Emmanuel Uduaghan for the second reading of the Bible which was taking from Luke 1:26-38. The former governor praised the Warri kingdom for her outstanding qualities, encouraging citizens to remain steadfast in their commitment to God. He ended his speech with the phrase, “Itsekiri! With God, nothing is impossible!”

Presentation of “Jemine”, “Teri Abi Olugbe”, “We three king of Orient” and “O come o come Emmanuel” by the Iwere Royal Choir followed the second Bible reading. Two of these were presented as congregational carols. The atmosphere was charged from the beautiful voices filling the air during the presentation.

Dr Omatsola Kpiase introduced Abuja-based vocalist, Chinonyerem Ndukwe, who overwhelmed the congregation and invigorated the atmosphere with some soulful yet pulsating solo performances of some popular Christmas hymns that thrilled guests enough to sing along.

Barrister Oki welcomed Apostle Tom Arayomi who gave the sermon with a Christmas-themed message. In his preaching, he highlighted the importance of Christmas and how its essence is reflected in our daily lives, likening Christmas to the human experience of pregnancy. He also explained that Christmas is all about family, neither nuclear or extended, but the entire family of Christ.

The Apostle indicated the pivotal role of the Warri Kingdom in Nigeria’s overall affairs. He cited prophetically that the Kingdom of Warri was the first place to receive the gospel as far back as the 15th century, and it was from this great Warri Kingdom that the gospel spread throughout the whole of Nigeria. In his words, “The Lord said, I will make Warri a gate again, I will enter through Warri again, and just as I brought Christianity here, I will birth the new Nigeria from this place.”

This followed with prayers for Ogiame Atuwatse III and his reign by Rev. Pastor Chris Utieyin Akperi, who roused the congregation with a series of prophetic words and said a prayer for the King. Towards the end of his sermon, the Pastor asked the entire congregation to stand on their feet, stretch their hands and pray for the King. He ended with a prophetic word for Ogiame Atuwatse III, “…every step you take, it shall end with praise.”

As a special feature for the night, Minister Chi, a guest performer, entertained guests, leading to a fine recession hymn for His Majesty, Ogiame Atuwatse III, which climaxed the event. Several earth-shattering, uplifting solos ensued. This included the standing ovation for the piercing opera notes hit during the solo performance of the song “Oh Holy Night” sung in Itsekiri.

The night ended with the famous “We wish you a Merry Christmas” chant. The closing prayer was rendered by RT. Rev. Best Agbolayah. All the guests sang along excitedly and soon followed the Olu’s procession out of the hall to the sight of blaring fireworks displays within the Palace. Guests commended The Monarchy for this initiative and prayed that Olu’s reign would remain continuous. Some guests commented about their excitement for the upcoming Saturday event; the Ghigho Aghofen (The Palace Watch).

This new initiative of His Majesty, Ogiame Atuwatse III, the Olu of Warri, a keen lover of arts and culture, is part of an intentional effort to open up the Kingdom and aggressively employ tourism as a source of wealth creation and gainful engagement for the people. The Ghigho Aghofen is scheduled to hold every quarter with other communities within the Kingdom taking turns to perform their roles.

You can watch every part of the Royal Iwere Christmas Carol online via the YouTube channel, Olu of Warri Kingdom and the Itsekiri Congress UK Facebook page.