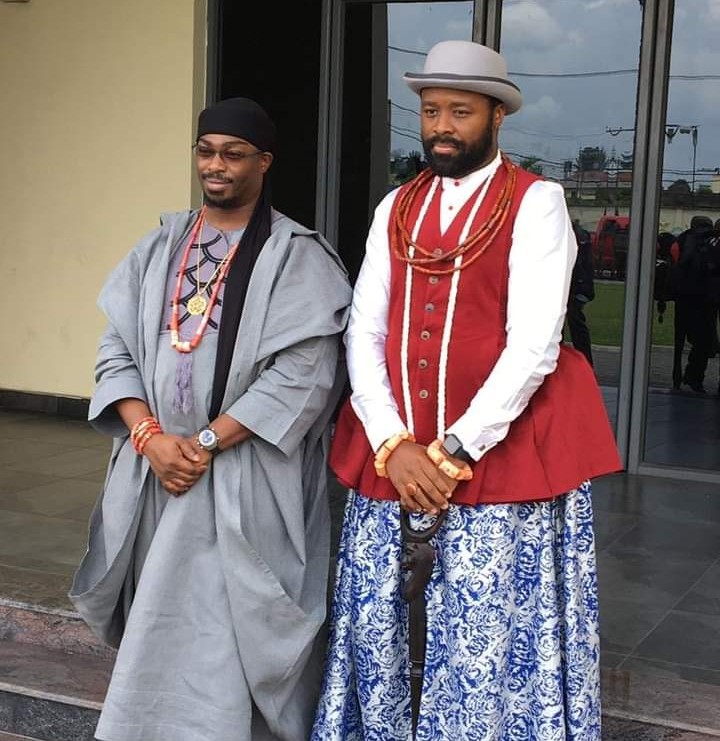 You have chosen well

The Dein of Agbor, His Majesty, Dein Keagborekuzi I commended the Itsekiri nation on the choice of Omoba Tsola Emiko as the Olu-designate, stating that he believes the Omoba would take Itsekiri Nation to greater heights. The Dein who stated this during his visit today to the Olu-designate at Idaniken (the traditional seclusion home of an Olu-designate) was full of praise for Warri Kingdom. The visit commenced with an opening prayer by Chief Mene Brown.

The Dein mentioned that Warri Kingdom is a second home to him in Delta State while reminiscing on the robust relationship that has existed between the Agbor Kingdom and Warri Kingdom including when both Kingdoms were still in the defunct Bendel State. He stated that it was the cordial relationship that helped to facilitate his visit to Omoba Tsola at Idaniken. “You have chosen right. The almighty God has chosen a good king for you. He will grow the kingdom to greater heights”.

Thank you to the Chiefs

The Dein thanked the Chiefs of Warri Kingdom who were present during his visit for always helping to to promote the rich traditions of Warri Kingdom. In his own words, “what will be will be. There are only two First Class Kings in Delta, which are the Obi of Agbor and the Olu of Warri. Never embarrass your King, anybody who does, embarrasses himself. There is a reason why the Chiefs wear white, the white must never be stained”.

Speaking further, he stated that “Tradition serves man, tradition is dynamic. The tradition years ago may not be so now. We must flow with time”. He advised Omoba Tsola to unite Warri Kingdom and close rank with all Itsekiris.

Dein Keagborekuzi I, who is a well-known tourism advocate, is expected to work with the Olu-designate and other traditional rulers in making Delta State a tourism Hub in Nigeria. He affirmed this much when he stated that he and Omoba Tsola has a lot to do in Delta State and the Niger Delta. Omoba Tsola presented the Dein with a rich historical document as a gift to the visiting monarch.

Chief Brown Mene gave the closing remarks and thanked the Dein and his entourage for the visit.