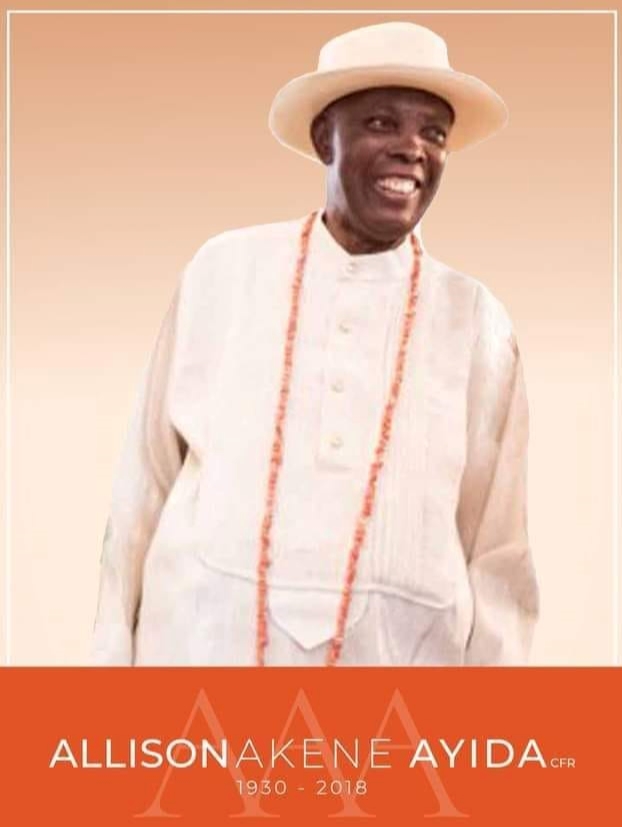 Renowned Sage, Quintessential Public Servant, Corporate Governance Connoisseur and Author, Allison Akene Ayida passed on to glory on 11th October 2018, aged 88. The elder statesman was born on June 16, 1930 in Gbelebu, an Ijaw village near Siluko, in present-day Edo State. Both of his parents were from Ugbege in Warri North Local Government Area, Delta State.

His early education was at the United Nigeria African Church School in Gbelebu, the Roman Catholic Mission School, Ubiaja, and Ogitsi Memorial School in Okere, Warri. He attended the prestigious King’s College Lagos, from 1947 to 1952.After his Higher School Certificate, Allison Ayida proceeded to Queen’s College, Oxford where he received his Bachelor’s degree in Politics, Philosophy and Economics (1953-1956).

Mr. Ayida started his postgraduate in Money and Banking at the London School of Economics & Political Science, but abruptly returned home when his father died. Upon his return in 1957, he was appointed Assistant Secretary in the Federal Ministry of Education. He later moved to the Ministry of Finance, where he spent five years, rising to the position of Senior Assistant Secretary. Mr. Ayida later became Permanent Secretary at the Federal Ministry of Economic Development and Reconstruction. For his laudable service, he was appointed Nigeria’s highest civil servant in 1975, as Head of Service (HOS) and fifth Secretary to the Federal Military Government (SGF).

As an administrator, professional and expert in Economics and Finance, he worked at Chase Manhattan Bank and Federal Reserve Bank, both in New York. Furthermore, he was the Governor Alternate of the IMF/World Bank’s Board of Governors, and President of the Nigerian Economic Society. Allison Ayida served as Chairman and member of several boards, such as: United Nations Economic Commission for Africa, National Rehabilitation Commission for Emergency Relief Operation and Post-War Rehabilitation and Reconstruction, Nigerian Security Printing and Minting Company Ltd. and so on. He also served as Director to Lever Brothers Nigeria Ltd., Chairman of S.G.E.N, Commercial Bank (Credit Lyonnais Nigeria) and CFAO Nigeria Ltd. as well as numerous other private companies.

Mr. Ayida initiated many economic ideas that shaped national growth and development. His impact was most notable through seven categories: Execution of Government policy; Initiation of public policy; Providing continuity in a dynamic and unstable situation; Providing unifying factors in a federation; Custodian of public conscience; A source of stability; and Leadership role within the service and community. Not only did he create these policies but fulfilled them over the course of his diligent career. As a result, he was among few to deservedly earn the nickname ‘Super Perm. Sec.’; a member of the elite class of Permanent Secretaries, who excelled in resourcefulness in the civil service during the Nigerian civil war and in the immediate post war reconstruction period.

Allison Ayida was present at the transition from colonial rule to Independence, and played an instrumental role at the inception of Nigeria’s national identity. He was there during the first years of Parliamentary Government when Nigeria was first run by Nigerians for Nigerians, and stood firm during the ‘khaki boys’ displacement of the First Republic politicians’ in January 1966. By the time he retired he had successively served three Heads of States: General Yakubu Gowon (1966-1975), General Murtala Muhammed (1975-1976) and General Olusegun Obasanjo (1976-1979).

The undeniable reason for his phenomenal success was the undoubtable quality of his training and education, his emotional appreciation of the sanctity of knowledge, and the wisdom allowing him to relate to his peers, superiors and subordinates alike, all with the same distinguished cordiality. Mr. Ayida was a decorated author of many books, including: National Reconstruction and Development (1969), Nigerian Revolution (1973), Federal Civil Service and Nation Building (1976), Reflections on Nigerian Development (1987), and The rise and fall of Nigeria: the history and philosophy of an experiment in African nation-building (1990).

Creditably, he was a recipient of the National Honour, Commander of the Order of the Federal Republic (CFR), an Honorary Degree of Law from the University of Benin, This Day LifeTime Achievement awarded by former French Prime Minister Dominique de Villepin, and held a foreign National Honour (National de merite): Officer Clan l’Ordre.

Allison Ayida left a legacy of courage, impartiality and objectivity behind. As a meritorious public servant, a devout family man and a faithful born-again Christian, his legacies shall continue to inspire generations to come. He was married to Oluremi Victoria Cheke, both of whom were blessed with five children: Mrs. Alero Ayida-Otobo, Dr. Gbubemi Ayida-Akerele, Mr. Omatseyin Ayida, Mr. Abi Ayida, and Mr. Maje Ayida.

As a sportsman, he enjoyed table tennis, swimming and football. However, he will forever best be known for his love of tennis and support for the Lagos Lawn Tennis Club. It has been said of him: “Ayida is deep, yet simple and sincere… he submits to his conscience, which fastidiously guides his actions. His mind is well nurtured, perceptive and resolute. Above all, he is clear in his mind on what to do at any given time, and the choices he made set him apart from the pack”.