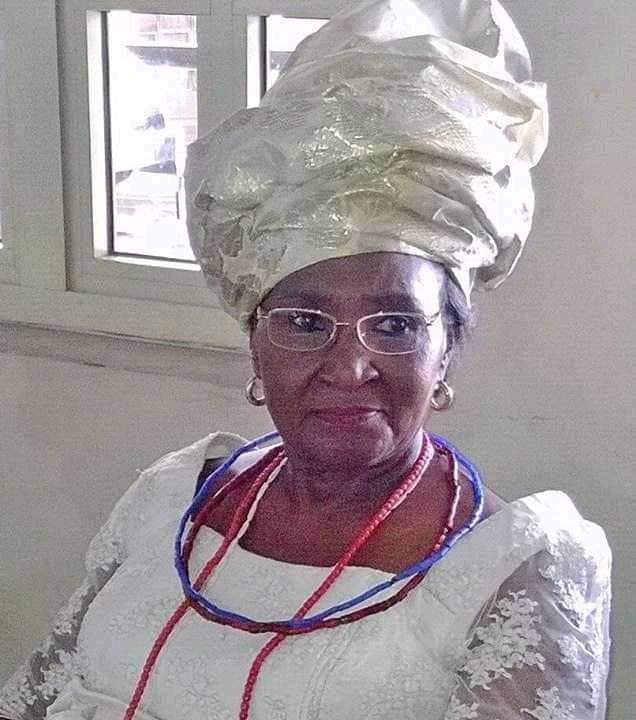 THIS FLORENCE WAS A NIGHTINGALE
A TRIBUTE TO CHIEF FLORENCE ELEMI REWANE
By Chief Edward Ekpoko
It was Shakespeare who said in the Twelfth Night that some are born great, some achieve greatness and some have greatness thrust upon them. For Chief Florence Elemi Rewane, she had it all – she was born great and had the same thrust upon her and equally achieved greatness as well. A biography of her is an excursion into Itsekiri aristocratic society especially from the era of interregnum from 1848 to the present day.

Chief Florence descended paternally from the Ologbotsere family of Warri, through his father, Chief Rewane Jemide Diare (the Osague of Warri; 1876–1977). Her father was the son of Jemide, who was the son of Diare, the Governor of the Benin River from 1851 to 1870. Diare was the son of Uwangue Uwankun, who was himself son of Ologbotsere Eyinmisan. The Ologbotsere Chieftaincy title is the highest in Itsekiri land, while the Uwangue ranks third.
Between 1848 and 1936, there was an interregnum in Itsekiri and, in this period, Itsekiris were ruled by Governors, an office necessitated by the absence of an Olu to meet the needs of the time. There were three Governors during this period, first was Diare, who was the great-grandfather of Chief F. E. Rewane. Others were Prince Tsanomi Omokun, a great maternal uncle of Chief F. E. Rewane, Olomu Asueruku and Nana Olomu. Diare led the Itsekiri people to sign the first trade treaty with the British, under Consul John Beecroft, on 4th April, 1851.
After the Ebrohimi Expedition of 1894 and the fall of Nana Olomu, Dore Numa was appointed a Paramount Chief of the Itsekiri people, in place of Chief Nana and he held that position until his death in 1932. Chief Dore Numa was Chief F. E. Rewane’s grandmother’s junior brother.
Maternally, Chief F. E. Rewane’s father descended from the Iyatsere family, as he was the son of Princess Mene, who was the daughter of Prince Numa. Numa’s mother was Princess Uwala Erejuwa, while his father was Oritsemogho, who was the son of Iyatsere Egharegbemi, the founder of Ubeji and several other Itsekiri communities. Again, the Iyatsere title is one of the highest in chieftaincy ranking, being the second in the hierarchy of chiefs of Warri Kingdom next only to the Ologbotsere.
Chief F. E. Rewane also had Itsekiri royal blood. Her father was the younger brother of two children and only son of Princess Mene, daughter of Prince Numa, who was the son of Princess Uwala. Princess Uwala was the daughter of Erejuwa I, the Olu of Warri (1760-95). Princess Uwala’s younger sister was Princess Iye, born of the same mother, Olori (Queen) Emaye to Olu Erejuwa I. When the monarch joined his ancestors in 1795, Emaye was inherited by Olu Akengbuwa (1795-1848) who was the half-brother to both Uwala and Iye.  Queen Emaye had three children for Olu Akengbuwa namely, Princes Omateye & Ejo and Princess Ejumogho. The descendant of the five (5) royal children of Queen Emaye namely Uwala, Iye, Omateye, Ejo & Ejumogho are compendiously known as Ugogo-maru in the Itsekiri history.
Chief F. E. Rewane descended from the noblest of the Itsekiri Chieftaincy institutions of Ologbotsere, Iyatsere and Uwangue and she is also from the royal family. Her most elder brother, Late Chief O. N. Rewane was the Ologbotsere of Warri and he crowned Atuwatse II, CON, as the Olu of Warri on 2nd day of May, 1987. The other uterus immediate elder brother was Late Alfred O. Rewane, the business mogul, philanthropist and financier of NADECO who was brutally murdered during the June 12 struggle under the Abacha regime. The two (2) Rewane brothers along with Late E. N. A. Begho founded the famous Hussey College, Warri.
Her rise to prominence is not merely because of her noble and privileged background although she consolidated and built on it, her fame rested on solid personal achievements.

Chief F. E. Rewane was born on the 10th of April, 1930 and started her primary education at the Catholic School, Burutu in the present-day Burutu Local Government Area of Delta State from 1940 – 1942 and then proceeded to Lagos where she attended Lady Lak Institute from 1942 – 1945. She had her secondary education at the Reagan Memorial Baptist Girls School, Yaba from 1946 – 1950.
In 1951 under the sponsorship of her elder brother, she proceeded to London and was at the Hammersmith Hospital, London from 1951 – 1955 where she did Nursing and qualified as a Registered Nurse of England and Wales. Chief F. E. Rewane later did her Part 2, Midwifery Course at the Queen’s District Nursing Association from August, 1955 – January, 1956.
She was later at the ANT Royal Free Hospital, London from August, 1956 – February, 1957. Chief F. E. Rewane was the first Itsekiri Registered Nurse in London. She returned to Nigeria in 1957 where she worked with the Western Region Government from 1957 – 1960 and during this time served in many government hospitals including the Warri, Sapele and Ughelli Central Hospitals.

She left the Midwestern Region Civil Service in 1960 and went into private practice where she opened the Numa Maternity on 30th November 1960. The Numa Maternity, which later became Numa Maternity and Clinic was a household name in Warri and the defunct Bendel State.
Chief F. E. Rewane was also a lover of sport and contributed immensely towards its development. She, along with Chief Edebiri, the Esogban of Benin organized the first female football tournament in Nigeria. She founded the Warri Ladies Football Club. Her club and the Hawks of Benin founded by Chief Edebiri played the final of the first-ever female football tournament in Nigeria held at Benin City in 1966.
Chief F. E. Rewane held several government positions, some of which are:
•Member of Midwives State Medical Advisory Board, 1968 – 1969
•Member, Midwestern Nigeria Regional Committee of Midwives Board, 1965 – 1976
•Appointed Member, Prison Visitors and Member of the Visiting Committee on 2nd December, 1974
•Member, Warri Divisional Council, 1975 – 1976
•Member, Warri Divisional Hospital Management Board, 1975 – 1976
•Councilor, Warri Local Government, 1976 – 1979
Board Member, BDPA, 1977 – 1980
•Board Member, Okpella Cement Factory, 1980 – 1983
•Board Member, Bendel Breweries, 1981 – 1983
•Member, Bendel Development Fund, Warri Chapter Management Committee, 1985 – 1986
•Chairman, Revenue Task Force, Warri Local Government Area, 1986
•Vice Chairman, Delta State Nursing & Midwifery Committee, 1992
•Member, Hospital Management Board, 1992 – 1993
•Honoured as Honorary Member, Rotary Club of Nigeria in 1997.
In appreciation of her contribution towards the development of Nigeria, the then Midwest and the Itsekiri people, Chief F. E. Rewane was conferred with the Chieftaincy title of the Ejumotan of Warri by His Royal Majesty, Erejuwa II in 1971.
She was a founding and prominent member of the foremost group in Itsekiri, the Itsekiri Leaders of Thought (ILoT) founded since 1974, and its Treasurer until February, 2017, when she along Late Pa J. O. S. Ayomike voluntarily step aside having served the Itsekiri people for well over five (5) decades.
Chief F. E. Rewane along with Late Dame Esther Rewane and some others also founded the Warri Ladies Vanguard in the 1970s and was a matron of the Oma-Ologbara Cultural Society, Warri.
She was a devout Christian of the African Church faith. She was a Trustee of the African Church, Warri and Patroness of the African Church, Lagos Central Diocese and also of the Lagos Province of the Church and above all held the highest honour for the laity in the church, the Primatial Honour of the African Church.
Like Florence Nightingale, the lady with the lamp, she was not only a Nurse and a founder of a Nursing Home for children, the sick and the elderly, she was also a social reformer and carried the light lit by Florence Nightingale (1820 – 1910). Like Florence Nightingale, our own Chief F. E. Rewane lived for 90 years.
Chief F. E. Rewane was a paragon of beauty and elegance. Whenever she stepped out, she carried herself with an arresting aesthetic candour expected of an Oton-Olu biri Ologbotsere/Uwangue. Indeed, the Bard put it more succinctly in Sonnet 41.5-6 “Beauteous thou art, therefore to be assailed.”
She was blessed with four children – Mrs. Rosaline Akindele, Gregory Rewane-Dakolo, Kenara Rewane-Dakolo and Wajeye Rewane-Dakolo; eight grandchildren and one great-grandchild.
Tweet

History of the Itsekiri People, Part 1