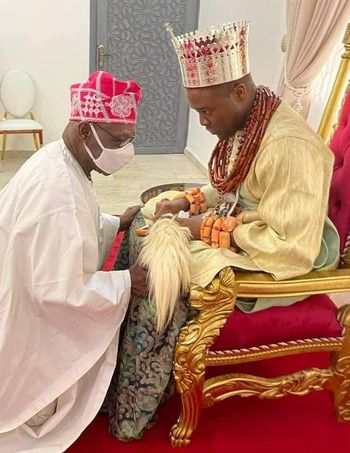 Following the coronation of Ogiame Atuwatse III, Warri Kingdom has played host to well-wishers who were unable to attend the coronation. The latest being former president, Olusegun Obasanjo; Delta State Governor, Senator Ifeanyi Okowa; Former Governor, Emmanuel Eweta Uduaghan and Former Governor James Ibori. They were all in Warri Kingdom during the coronation thanksgiving service at the Olu of Warri’s Palace Chapel to pay homage to His Imperial Majesty, Ogiame Atuwatse III.

President Obasanjo who visited Ogiame Atuwatse III at Aghofen (Olu’s Palace) at Ugbori, Warri praised the Itsekiri people for the new dawn in Warri Kingdom. While addressing the Olu of Warri, President Obasanjo advised the Olu to unite Warri Kingdom. He also informed the Olu that he could call upon him anytime he so wishes and he would be available. Governor Ifeanyi Okowa also re-echoed the message from President Obasanjo, advising the Olu that “It’s time for healing; ensure the entirety of the kingdom comes together. Whether stubborn or not, extend the olive branch to them. You have a lot of work to do in Nigeria, we cannot afford any distraction at home.”

Papa Ayo Oritsejafor had earlier presided over the Holy Communion. After this, President Obasanjo prayed for a peaceful and long reign of Ogiame Atuwatse III, the Olu of Warri. He urged him to stay very close to God. Speaking further, President Obasanjo stated that he has seen the installation of three Olus and he wouldn’t want to see a fourth Olu installed. “The position you occupy is given to you by God but with your people surrounding you. You’ll be offending God not to perform the task He has given to you. “Your title carries a lot of responsibilities. Two things must guide you; one, don’t shun the experience and advice of elders, two, be very close to God. In whatever situation, be close to God.”