FROM THE ARCHIVES: THE TITLE, “OLU OF WARRI” 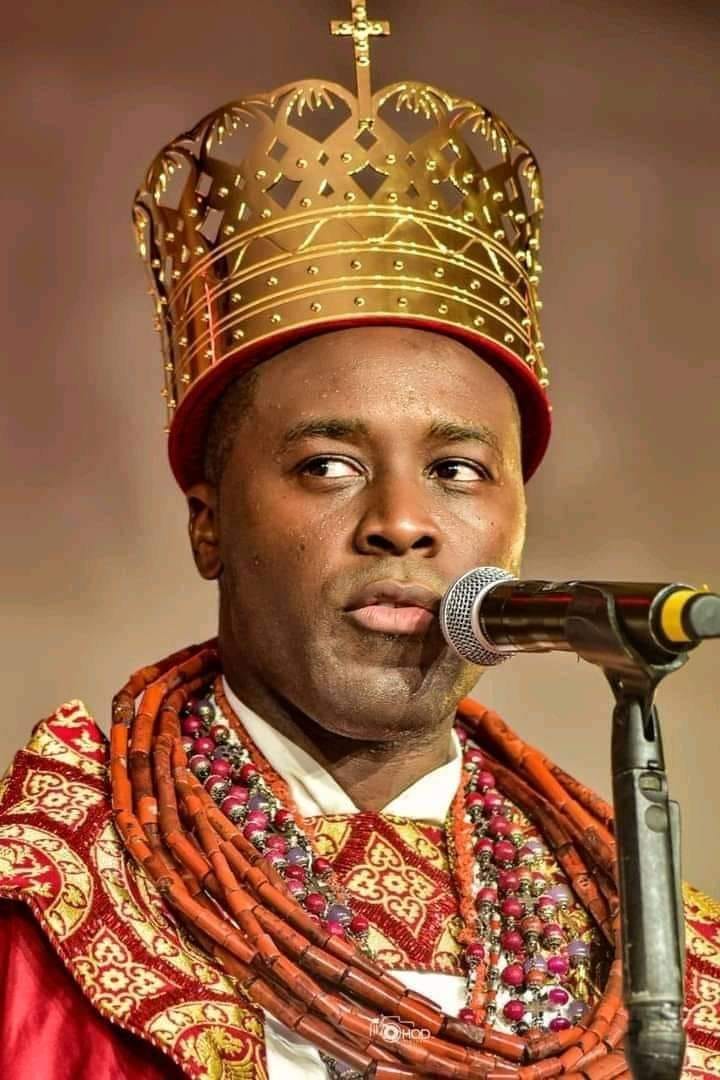 By Late Alfred Ogbeyiwa Rewane
THE TITLE: “OLU OF WARRI” AND LATE CHIEF OBAFEMI AWOLOWO HISTORIC COMPROMISE IN RESOLVING THE ISSUE IN 1952
A PRESS STATEMENT BY LATE MR. ALFRED OGBEYIWA REWANE, PUBLICATION IN NATIONAL NEWSPAPERS ON THURSDAY 20TH MAY, 1993.
Recently, there have been misleading statements in the media and from neighbouring tribes and elsewhere on the Official Title of the WARRI Monarch by persons who are either uninformed or deliberately mischievous about the OLU’s correct Title.
Perhaps not surprisingly, among the uninformed are to be found some ITSEKIRI young Men and Women in the professions, academia, business and the public service.
Some of these young people, anxious to know the facts would, at a social occasion, call one aside and quietly ask: “Uncle, is it true that prior to 1952, the OLU was called OLU of ITSEKIRI, and it was Papa AWOLOWO, then Premier of the Old Western Region, who changed the title to OLU of WARRI?”
Among the monolithic ITSEKIRI People, education of the younger generation on their past, their customs and traditions is a continuous process of socialization.
In the past, it used to be a pleasure and indeed a duty for the Elders to play the role of Teacher and Leader in this matter. Regrettably, there have been severe constraints on the Elders playing that role arising from the events in ITSEKIRILAND since the coronation on 2nd May, 1987 of the previous Monarch, Ogiame Atuwatse ||, OLU of WARRI.
However, in deference to pressure from the younger generation who are anxious to learn more about their past in other to fully appreciate the present, and also to set the records straight on the role played by the late Chief OBAFEMI AWOLOWO in the matter of the OLU’s Title, I have decided to issue this statement for the education of our young ones and for the enlightenment of the public at large.

It was Professor SABURI BIOBAKU, as Chairman of the YORUBA Historical Research whose “Odu” Volume 4 is substantially devoted to the ITSEKIRI, who said that the history of the WARRI Monarchy and the ITSEKIRI People is one of the best documented in NIGERIA, beginning from the great YORUBA Migrations of the 12th Century.
But the History of the WARRI Monarchy itself began when, according to JACOB EGHAREVBA, the BENIN historian, the BENIN Crown Prince, IGINUA, who later became GINUWA |, OLU of WARRI, was mandated by his Father, Oba OLUA (about 1473), the OBA of BENIN, to go and found a KINGDOM in, and Reign over, the Riverine Areas. Hence the OLU is called, “OGIAME”, which in EDO means “the King who reigns over Riverland”. GINUWA | founded the WARRI KINGDOM in 1480.
Thanks to the impeccable records kept by the early European Explorers, Missionaries and Traders who came to West Africa and interacted with the People, including the OLU and the ITSEKIRI People. It has long been recognized and acknowledged that the Official Title of the WARRI Monarch, from the founding of the WARRI KINGDOM in 1480, has always been OLU of WARRI.
There is abundant documentary evidence that in the 16th and 17th Centuries, the OLU had been known and referred to as the OLU of WARRI, ” WARRI ” being the KINGDOM over which the OLU Reigned. The word “WARRI” derives from “IWERE”, the name by which the ITSEKIRI call their Homeland. OMIWERE” or “OMA-IWERE”, meaning the Son or Daughter of ” IWERE” Land, is the generic name for all ITSEKIRIs. IWERE is the Land and not the People.
Through the ages, the various Europeans with whom the ITSEKIRI interacted had employed varying corrupt versions of WARRI and OMIWERE, like “OYWERE” and “OERE” by the early Portuguese, “WARRI” by Captain John Adams in 1823, “WARI” in 1841 by the British Consul, John Beecroft. John Adams and John Beecroft wrote during the reign of Olu AKENGBUWA (1795-1848), the last OLU before the “Interregnum of 1848-1936, and therefore, the immediate Predecessor of GINUWA || (1936-1949).
The Following Historical Facts Are All In Support Of The Antiquity And Authenticity Of The Title “OLU OF WARRI”.
i) In 1607 the King of Portugal made a decree in which reference was made to the “King of WARRI” and to “Prince DOMINGOS”, Son of the King of WARRI. The Prince’s ITSEKIRI Name was EYEOMASAN. His Father Olu ATORONGBOYE (6th OLU of WARRI, 1597-1625) was the First OLU to be Baptized (as SEBASTIAN). Prince EYEOMASAN, on being Baptized, was given the Name DOM DOMINGOS. He reigned as ATUWATSE I (7th OLU of WARRI, 1625-1643).
(ii) One John Barbot, a Dutchman, writing in the 17th Century about WARRI said:
“The Capital Town OYWERE, which gives its Name to the whole Country lies in River Forcado…….”
(iii) In 1682 Father Jerome Merolla da Sorrento wrote:
“Two Capuchin Missionaries together with Father Bonaventura da Firanze having just set foot in the KINGDOM of OUUERRI (WARRI). They were very courteously received by the King”.
iv) P.A. Talbot wrote at page 320 of his book titled “The Peoples of Southern Nigeria”: 1651.
According to Urbanus Cerri, “the King of WARRI wrote to Pope INNOCENT X, asking him to send him Missionaries for his own good and that of his subjects”.
(v) A Frenchman known as Captain Landolphe writing in the 18th Century made references to the “OLU of WARRI” and said that in recognition of the trade potentials of both BENIN and WARRI KINGDOMS the King of France, LOUIS XVI by an “Arret du Conseil d’ Etat” of the 27th of May 1756 granted a charter to a Company known as the “Compagnie d’ OWHERE et de BENIN” (Company of WARRI and BENIN). This was before and similar to the Royal Niger Company which had its charter from the British Monarch.
Following the death of Olu Akengbuwa II, who reigned as Olu of Warri, in 1848, there was an eighty-eight-year interregnum during which there were no Olus crowned in Warri. In that period, Warri or Itsekiri country was ruled by governors, who were mostly powerful merchants. Nanna’s defeat by the British Royal Navy in the War of 1894 greatly weakened these merchants and would later pave the way for the resumption of the monarchy in Warri in 1936.
In 1914, Lord Lugard created Nigeria by amalgamating the Northern and Southern protectorates. For administrative purposes, provinces were created throughout the new country. A province was named after “Warri” and this province encompassed Urhobo, Ijaw, Isoko, Ndokwa and Itsekiri lands. During preparations to resume the Itsekiri monarchy by the coronation of Ginuwa II in 1936, official references were to the “Olu of Warri”. However, the Urhobo Progressive Union, under the leadership of Chief Mukoro Mowoe, prevailed on the colonial administration to change the title to “Olu of Itsekiri”. His argument was that the entire Urhobo Division, being part of Warri Province, could be construed to under the Olu’s domain. Predictably, the change was denounced by notable Nigerian personalities who were not even Itsekiri.
Dr. Nnamdi Azikiwe, then a newspaper publisher, wrote as follows in the West African Pilot of May 14, 1940:
“HIS HIGHNESS GINUWA II IS OLU OF THE ITSEKIRI-SPEAKING PEOPLE, WHO LIVE ON ITSEKIRI LAND… IF THE MATTER IS DISCUSSED IN DETAIL, IT WILL BE FOUND THAT A DEFINITE TITLE IS NECESSARY, IN WHICH CASE, THE OLU OF WARRI SEEMS TO BE THE MOST HISTORICAL AND CORRECT. WHEN WE SPEAK OF THE OBA OF LAGOS WE REFER TO THE PARAMOUNT NATIVE RULER OF LAGOS, ALTHOUGH LAGOS IS PEOPLED MAINLY BY YORUBA-SPEAKING PEOPLES AND LAGOS IS PART OF YORUBALAND. SO TOO, IN THE CASE OF HIS HIGHNESS GINUWA II, THE OLU OF WARRI IS THE PARAMOUNT NATIVE RULER OF WARRI…”

It is noteworthy that, after a riot and an inquiry in 1952, Chief Obafemi Awolowo invited both Itsekiri and Urhobo delegations to present their case for and against the Itsekiri monarch being called the Olu of Warri. The late Chief M.E.R. Okorodudu presented the Itsekiri case based on historical facts and common sense. Chief P.K. Tobiowo spoke for the Urhobos but did not dispute the historicity of the Itsekiri claim. He merely repeated Chief Mowoe’s assertion of 1936 that since Warri Province included other homelands, the title “Olu of Warri” would suggest that the Olu was the titular head not only of Warri Division but also to other divisions within the province. Chief Okorodudu then suggested that the name of the province be changed to Delta, confining “Warri” to Itsekiri homeland which had been the Olu’s domain for centuries.
BOTH THE URHOBO DELEGATE AND THE GOVERNMENT ACCEPTED THIS COMPROMISE.
This was then presented to the Western House of Assembly in Ibadan where it was debated and adopted.
THE NAME OF THE PROVINCE WAS THEREFORE CHANGED TO DELTA AND TITLE OF THE OLU OF WARRI REVERTED TO ITS ORIGINAL FORM.
Ijaws never protested against the title and Urhobos accepted the confinement of the power of the Olu to Warri – the Itsekiri homeland.
Tweet