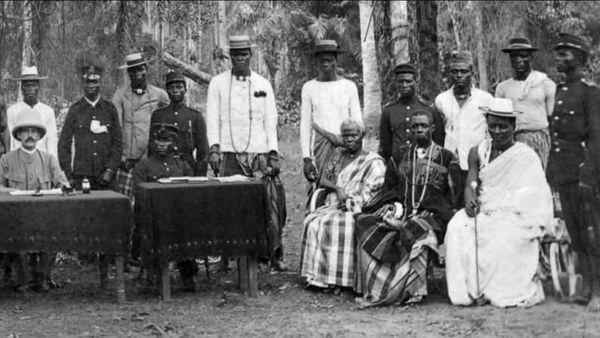 1. The Itsekiri call themselves Itsekiri or Iwere, … In English literature they are known as #Warri or Jekri,…. Warri and Itsekiri have been spelt in many different though recognizable ways by European writers e.g. Oere, Ouere, Awerri, Owerri, Jekri and Jakri.”
2. The #ITSEKIRI language is made up of about 85% Yoruboid and 12% Portuguese words.
3. The Itsekiri language have no dialect.
4. The Itsekiri People have just one king Known as The Olu Of Warri.
5. Warri Kingdom was an independent sovereign Itsekiri nation from 1480 to 1885.
6. The ancestral home of the Itsekiri People is Ode-Itsekiri Olu also known as Big Warri.
7. Warri City got its name from Warri(Big Warri) the capital of the Itsekiri nation.
Amoury Talbot, a colonial administrator, in the book, Peoples of Southern Nigeria, 1926, vol. 1, page 317, says: “The Jekri (Itsekiri) were called Iwerri and from this, their town was given its present name Warri”.
8. Warri encompass the three Itsekiri local government areas of Warri South, Warri South-West and Warri North.

9 The ancient boundary of the Independent sovereign kingdom of Warri covers both banks of Benin River down to river Calabar.
1678 – 1682 John Barbot
A description of the coast of North and South-Guinea; and of Ethiopia Inferior, vulgarly Angola: being a new and accurate account of the Western maritime countries of Africa in six books London 1732. In this chapter, I shall speak of the kingdom of Ouwere or Forcado, and of the coast from cape Fermosa, where the Ethiopian Gulph or bight of Guinea commences, to the river of new Calabar or Calbary. Captain Okro September 1786 (Captain Okro is Chief Okorodudun, a Chief Of Ogiame Erejuwa I A.K.A Sebastiao Manuel Octobia 1760–1795). Landolphe’s memoirs
“The sovereign of this state owns not only both banks of the Benin river but also all the rivers of these parts as far as the tributaries of the Calabar”
10. Ginuwa, a prince of Benin founded the Iwere (Warri) Kingdom about 1480.
11 Olu Dom Domingo was the first university graduate from the region now known as Nigeria.
12 The first Church In the area now known as Nigeria was built in Big Warri around the mid-1600s. St Antonio Church is known by the Itsekiri as Satoni.
13 Olu Dom Antonio Domingo wrote the oldest letter to the Pope from West Africa on 20th December 1652.
14. The indigenous People of Warri kingdom are referred to as Iwerrian (see 11-1786 Capitaine Landolphe) or Oma Iwere which leads to the use of the word “Warri Pikin”.
15. The Tittle “Olu of Warri” has been used for over 300 years before the interregnum of 1848 – 1936 when there was no Olu.
See; Story of Dom Domingos, Prince of Warri below https://ngr.ng/story-dom-domingos-prince-warri/

Also in 1842, Father Jerome Merolla referred to the “reigning Olu of Warri.” Sir Alan Burns G.C.M.G. gives an account of the “King of Warri” who lived in 1644 on page 75 of his History of Nigeria. A.F.C. Ryder on page 14 of his work, Missionary Activity in the Kingdom of Warri to the early 19th century, in collaboration with a six-man editorial board headed by Dr. Kenneth O. Dike states “… in 1685 the Olu of Warri had again petitioned the King of Portugal to send missionaries ….”
16. Following the death of Olu Akengbuwa, who reigned as Olu of Warri, in 1848, there was an eighty-eight-year interregnum during which there were no Olus crowned in Warri. In that period, Warri or Itsekiri country was ruled by governors, who were mostly powerful merchants. Nanna’s defeat by the British Royal Navy in the War of 1894 greatly weakened these merchants and would later pave the way for the resumption of the monarchy in Warri in 1936.
17. In 1914, Lord Lugard created Nigeria by amalgamating the Northern and Southern protectorates. For administrative purposes, provinces were created throughout the new country. A #province was #named after “#Warri” and this province encompassed Urhobo, Ijaw, Isoko, Ndokwa and Itsekiri lands.
18. During preparations to resume the Itsekiri monarchy by the coronation of Ginuwa II in 1936, official references were to the “Olu of Warri”. However, the Urhobo Progressive Union, under the leadership of Mukoro Mowoe, prevailed on the colonial administration to change the title to “Olu of Itsekiri”. His argument was that the entire Urhobo Division, being part of #Warri #Province, could be construed to be under the Olu’s domain. Predictably, the change was denounced by notable Nigerian personalities who were not even Itsekiri. Dr. Nnamdi Azikiwe, then a newspaper publisher, wrote as follows in the West African Pilot of May 14, 1940:
“His Highness Ginuwa II is Olu of the Itsekiri-speaking people, who live on Itsekiri land… If the matter is discussed in detail, it will be found that a definite title is necessary, in which case, the Olu of Warri seems to be the most historical and correct. When we speak of the Oba of Lagos we refer to the Paramount Native Ruler of Lagos, although Lagos is peopled mainly by Yoruba-speaking peoples and Lagos is part of Yorubaland. So too, in the case of His Highness Ginuwa II, the Olu of Warri is the Paramount Native Ruler of Warri…”

19. It is noteworthy that, after a riot and an inquiry in 1952, Chief Obafemi Awolowo invited both Itsekiri and Urhobo delegations to present their case for and against the Itsekiri monarch being called the Olu of Warri. The late Chief M.E.R. Okorodudu presented the Itsekiri case based on historical facts and common sense. Chief P.K. Tobiowo spoke for the Urhobos but did not dispute the historicity of the Itsekiri claim. He merely repeated Chief Mowoe’s assertion of 1936 that since Warri Province included other homelands, the title “Olu of Warri” would suggest that the Olu was titular head not only of Warri Division but also to other divisions within the province. Chief Okorodudu then suggested that the name of the province be changed to Delta, confining “Warri” to Itsekiri homeland which had been the Olu’s domain for centuries. Both the Urhobo delegate and the Government accepted this compromise. This was then presented to the Western House of Assembly in Ibadan where it was debated and adopted. The name of the province was therefore changed to Delta and title of the Olu of Warri reverted to its original form.
20. Ijaws never protested against the title and Urhobos accepted the confinement of the power of the Olu to Warri – the Itsekiri homeland.
21. Pass it on.
Tweet