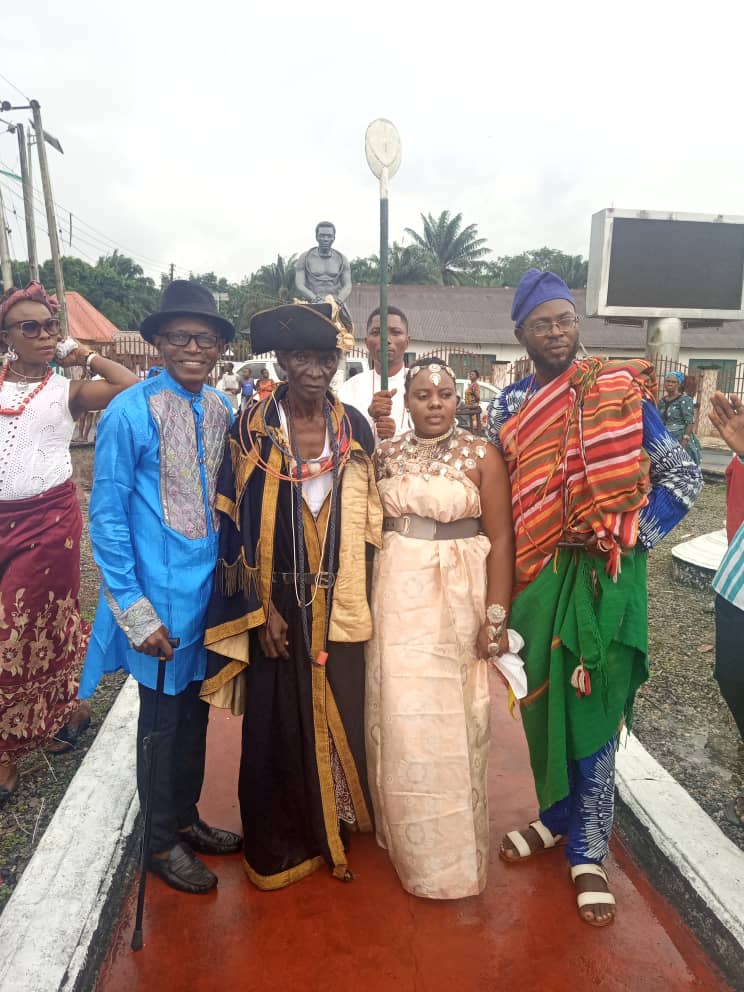 The Nanna family and the entire Koko community celebrated the return of Gofine (Governor) Nanna Olomu, on the 8th of August 2021. The event also known as the Nanna/Neville’s day celebration was the 115th time the event has been celebrated. The event marked the return of Nanna from Accra, Ghana where he was sent on exile by the British Government after he surrendered to them in Lagos. It would be recalled that Nanna had fought against the British in the Ebrohimi expedition and the British suffered heavily. This angered the British and they returned with the help of fellow Itsekiris to Ebrohimi but Nanna had left the community and resurfaced in Lagos.

There was a good turnout at this year’s event despite the heavy rain that fell on the day. The event was graced by Nanna descendants and the extended family from Koko community. The board and management of the Nanna Living History Museum were also present. They were ably represented by the curator, Comrade Ehi, Mr Henry Erikowa (Board Chairman) and Pa Anthony Nanna (Board Member) who interestingly, was involved in the story of the day.

Highlights of the event

The event commenced with a play to depict Nanna’s triumphant return. Pa Anthony Nanna, the Olori-Ebi of the Nanna family worldwide played the role of Nanna. He was dressed in one of Nanna’s attire and was joyously welcomed and escorted from the waterfront to the Nanna Living History Museum courtyard. The Nanna Living History Museum (also known as Nanna Palace) was started by Nanna in 1907 and was completed in 1910. The Federal Government declared it a National Monument in 1979 and was upgraded to a Museum in 1994 to commemorate the ignoble and nonsensical war the British waged against Nanna and his people of Ebrohimi in 1894. Today, the scope of the Museum is backed by Decree No.77 of 1979.

While on the procession to the Museum, a green red and yellow flag was conspicuous raising eyebrows. The flag was one of Nanna’s symbols of authority when he became Governor of the Benin River in 1885. During this period, the Itsekiri Nation was facing an interregnum (a period without a King – Ogiame or Olu of Warri Kingdom). Nanna was the leader of the Itsekiri people as well as managing the entire Benin River and the trade that flows through it. Bitter rivalries were at their peak which eventually led to Nanna’s rule and influence being cut short as a result of the war in 1894.

Back to the event. A well dressed Itsekiri lady walked alongside Pa Anthony as part of the short play. This lady played the role of Nanna’s wife, Mamie that returned with Nanna from exile. As part of the event, there was a sporadic shooting of the native cannon (kurusu) and a cultural dance display.

Professor Lucky Akaruese, who is the National President of the Nanna Family of Koko confirmed this year’s event was used to celebrate the fact that Nanna was the only prominent person sent on exile by the British who was able to reestablish their dominance before he died on July 3rd, 1916.

Speaking after the event, the Board Chairman of the Nanna Living History Museum, Mr Henry Erikowa was excited with the turnout. He was also happy with the successful hosting of the event. He encouraged the Koko community to close ranks. Furthermore, he stated that he believes Koko community has huge growth potential when there is peace. “Tourism has the potential to unlock the potential”, he stated.

Speaking on upcoming events, he advised that the anniversary of the Nanna Living History Museum was previously planned for July this year. He confirmed this has been moved to the 26th of September which coincides with this year’s World Tourism Day.