Ogiame Atuwatse III; The nucleus of the new order in Warri Kingdom 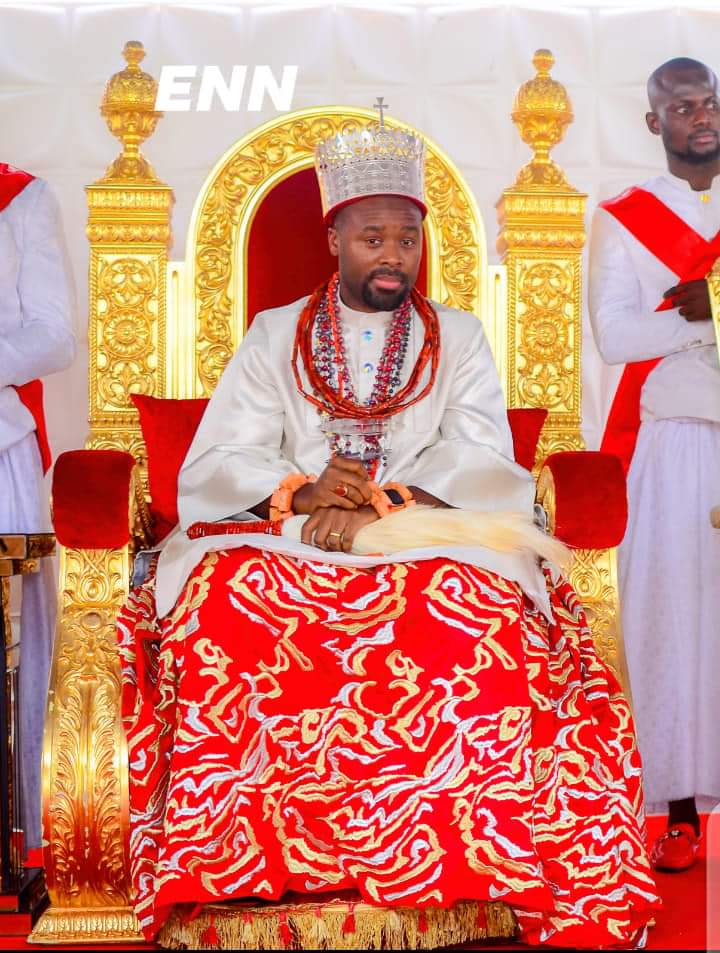 The cog on our wheel of progress lifted!

When the sun rose on the 5th of April 2021 to shade over the ancient town of Ode-Itsekiri, the ritual of “smashing the calabash” announced Ogiame Atuwatse III as the “chosen one” and the 21st Olu of Warri. The euphoria it breeds relieved the soul of a drowning nation of the weights strung to her neck while adrift to the point of anchor. For the first time in our recent history, the people of Warri Kingdom arose with the push of quantised energies above the burgeoning sea tides that have for so long cast a gloomy shade over its once revered horizons. There seems to be a reawakening in the entire Kingdom that even her neighbours; although edgy at times, also embraced the contagious euphoria. This made me believe that Chief Johnson Amatserunleghe (The Iyatsere of Warri Kingdom) must have heard a voice of divine providence saying, “This is the one, in whom I am well pleased and upon this rock, I will rebuild this kingdom”, as soon as he struck the calabash in Ode – Itsekiri.

The whole of Nigeria and world over; including the political, business and socio-cultural elite, quickly became awestruck by the display of power, pageantry and purpose at the coronation of Ogiame Atuwatse III on 21st August 2021 at Ode – Itsekiri. Nonetheless, this only reflects an indelible, but recently muted persona, pride and prestige within the soul and sinew of every Itsekiri alive today, and have so remained for over 500 years. For us, this was a true moment of inflexion back to the core principle of existence of our people, albeit in a modern century.

What the world witnessed is who we are! It is our physiognomies;

A nation united under one King; the Olu of Warri!

We are back! The buzz is real, and the ship of a people reunited under one King has only just set sail!

The end of her dreams is the point where the rainbow literally kisses the earth-scape. It is endless!

The mission of tomorrow!

The Olu of Warri, Ogiame Atuwatse III is indeed above all except the Almighty God, and the custodian of the visions; written and unwritten, of Warri Kingdom. These visions are revealed only through divine revelations in all wisdom and spiritual understandings. The first few steps will always be an indication of the general principle and direction of travel of the re-emerging Warri Kingdom. We are yet to be disappointed! Two of the Olu of Warri’s initial moves have been inspiring. They reflect a deep understanding of the history, poise, strategic and spiritual relevance of the ancient Warri royal throne, as well as the opportunities that await her resurgence.

The women and the girl-child; our mothers, sisters and daughters

Over the course of my existence, the potency of women in driving the socio-economic and political agenda of our society have remained untapped. However, since the emergence of Ogiame Atuwatse III, I have now noticed the presence of Olori Atuwatse II; Mother of the Olu of Warri, and the Kingdom now relishes the sophistication, charisma and deep sense of connection with our Olori Atuwatse III. This will help to unleash the economic, cultural and political powerbase of the Itsekiri girl-child and women in general. This only brings to life the famous quote by Debasish Mridha; “by empowering women, we empower the nation” in Warri Kingdom.

Ghigho Aghofen “The Great Palace Watch”; the infant step in the new order

Ghigho Aghofen initiative was launched on Saturday 18th of December 2021 by Ogiame Atuwatse III to kick-start the cultural renaissance of Warri Kingdom. In scope and design, it aims to highlight the rich cultural heritage of the people of Warri Kingdom. However, beneath the surface, it promises a means to reconnect and strengthen the strings that have held all Itsekiris under one King, the Olu of Warri for over 500 years. This will bring into unity and under one vision all Itsekiri communities; from Aboriginal communities such as Ode-Itsekiri and Usele in Warri South LGA, Abibobi and Saghara-kporo in Warri South West LGA, to Udo and Bobi in Warri North LGA. This also includes communities such as Ibirifo in Ethiope East LGA, Aja-Ogunoyibo in Okpe LGA, Obontie in Sapele LGA, Egbogide in Udu LGA and Ugbolokposo in Uvwie LGA.

There are also other Itsekiri communities within the Patani, Bomadi and Burutu LGA axis of Delta state. Communities such as Ugbo, Ajoki and Kolokolo in Edo state and others close to the Ilajes of Ondo state are also well-established Itsekiri communities expected to participate in the new “Ghigho Aghofen” initiative. Ghigho Aghofen will also help tighten all the historical, cultural and economic strands to descendants of Odudwa, Oranmiyan and our ancestors in Igala land. These historical, economic and socio-political networks needs to be sharpened to deliver the vision of Ogiame Atuwatse III for a re-emerging Warri Kingdom.

Beyond the socio-cultural renaissance agenda that inspired “Ghigho Aghofen”, is the most yearned for new structural order within the Itsekiri economic and socio-political arrowheads to champion the economic and cultural agenda of Ogiame Atuwatse III. Beneath the veil of fanfares, splendours and euphoria is the perennial need for a unified direction for all Itsekiris that will help to deliver true economic, political and security benefits for all our people; inclusive of our neighbour. In this journey, we will need the following types of leaders to re-merge. We once had them within our ranks;

The Josephs – to interpret the visions and clearly transmit them to all the instruments of the Kingdom.

The Esthers – to engage with institutions against all odds but backed by the providence of heaven.

The Nehemiahs – to rebuild the walls of our kingdom and fight to defend its sovereignty.

The Daniels – to serve with integrity, character and distinction even in an unholy and hostile government.

As clearly stated during the coronation speech, when Itsekiri rises, an illuminated Kingdom emerges in Nigeria. Itsekiris and indeed Warri Kingdom has always been an integral instrument in Nigeria’s political and economic evolution. It does not stop now; she is only re-emerging from the rubble of a muted socio-political and economic odyssey.

Indeed, nothing is as powerful as an event whose time has come. Ghigho Agofen is just the beginning, and I pray that every soul and sinew of Warri Kingdom embraces the new order for my postulation to be true with the passage of time.