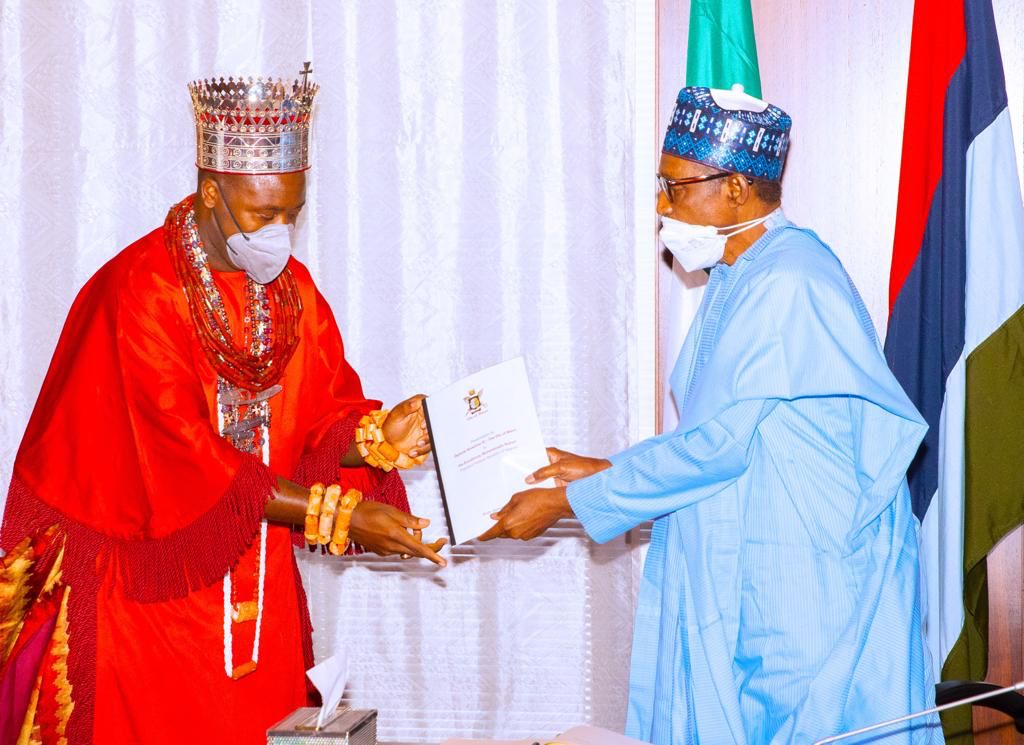 President Muhammadu Buhari on Wednesday received His Royal Majesty, Ogiame Atuwatse III, five months after his coronation as the Olu of Warri. Speaking at the State House in Abuja while receiving the monarch and some of his chiefs, the President pledged a fair deal to the Itsekiri people of Delta State.

“I’m grateful for your visit and impressed by your patriotism. I’ve taken note of your requests, and will work on them as soon as politically possible,” Buhari was quoted as saying in a statement issued by his spokesman, Femi Adesina.

In his remarks, the Olu of Warri said the visit was to primarily thank the President for sending a high-powered delegation to his coronation as the 21st monarch of the Kingdom, “and for your kind felicitation, goodwill and solidarity.”

He also reiterated the loyalty of the Itsekiri people to “one united Nigeria, as we support your government’s aspiration to provide security and economic prosperity to all Nigerians, irrespective of tribe, creed or religion.”

While describing President Buhari as “a dogged patriot and fervent believer in Project Nigeria,” the Olu drew attention to what he called “some burning issues that are dear to our hearts.” The issues included the under-utilization of the four ports in Warri, Koko, Sapele, and Burutu, all in Delta State, reconstitution of the NDDC Board, immortalizing the first Finance Minister of the country, Chief Festus Okotie-Eboh, and resuscitation of the Ogidigben EPZ Project, which has reportedly been abandoned.

On the NDDC Board, he said he believed the President would soon reconstitute it, “as an interested party, we genuinely want a better deal for us in the Niger Delta, as we believe charity begins at home. By this, we mean that we Niger Deltans must be ready to put the betterment of our people first in all we do. Putting our people first is the only way to make our lives better.”